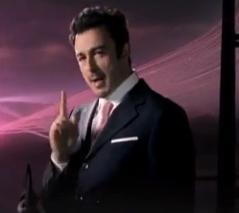 We previously saw Shaan doing ad campaigns for giant International companies in Pakistab such as Mobilink, Pampers and Lux, but this new ad of Shaan, in which he has shown his acting diversity very well and has convinced the audience to praise his talent, Acting and to accept him as the ‘Biggest Star” of Pakistan Film Industry.

We have also seen the advertisements of other big stars of the entertainment world such as Reema (Warid & Lux), Ali Zafar (Jazz & Telenor), Fawad Khan (Clear Shampoo and Sprite) and many more but no one was as successful as Shaan, surely because of his immense acting talent, which was never utilizedvery well except in these ads and movies like Khuda Key Liye and Wohti Le Ke Jaani Aye.

Previously the title of ‘biggest star of Lollywood’ was with Reema Khan, who has also done successful ad campaigns for brands like “Pepsi” and “Lux”, but her association with Warid wasn’t that much successful as it was with Lux and Pepsi in past. On other hand Shaan after doing successful ad campaigning for Mobilink (which changed the image of Shaan Shahid completely from a violent Punjabi Gujjar to a Sober gentleman) came to Pampers, and now the latest association with Engro Corporation has again gained him the title of biggest star of Pakistan.

The ad which shows Shaan in different characters telling about the advantages of the service called ‘Engro Rupiya Certificate‘, from a family man to chef, from a celebrity to farmer and from an educationist to a businessman, the ad has given him full chance to give a demo of his acting talent. Besides the acting in ad, the way he has filled the excellent expressions with completely character matching voice  is also amazing.

For this Engro should also be appreciated for the money they have put into this TV Commercial and also for signing Shaan and taking full advantage of his immense abilities.

Now one thing has been proved, that from typical Punjabi Films to Khuda Ke liye and from the ads of Shan Foods to Engro Rupiya Certificate and Mobilink, Shaan is perfect for everything.

Below is the TVC of “Engro Rupiya Certificate”, which Shaan appeared in.