The 17th Lux Style Awards 2018 took place in Lahore last week and left us dismayed. Be it the poor execution of a theme that did not really gel well with the event in the first place, or the fact that the night was painfully low on entertainment value, but this edition of the awards was definitely amongst the weakest ones of the much-hyped LSAs. However, the list of winners went as expected, as did the red carpet appearances whereby some impressed and some left us scratching our heads. Here is our style file where we pick our top five ‘yay’ and ‘nay’ looks from the ceremony. 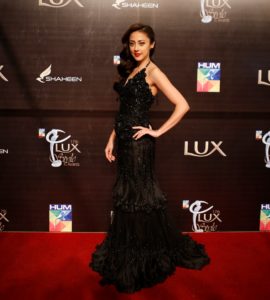 We absolutely loved this look on Ainy! Black is a classic at any red carpet around the world and one can hardly go wrong with it. Stylist Rao Ali definitely gave his best as we simply couldn’t take our eyes off Ainy who attempted to go bold with the red lips and side swept hair reminiscent of the 80s. This look was a major yay, and we definitely want to see more of Ainy on red carpets. 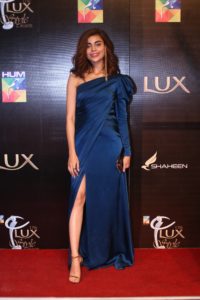 Model turned actress Sadaf Kanwal looked effortlessly chic in this silk draped one-shoulder dress. The confidence with which Sadaf slew this look had us head over heels for her. The no makeup look paired with just one accessory turned the outfit into a perfect red carpet attire. Also, we hardly remember this girl ever going wrong with her appearances, no wonder she is the face of every other clothing brand. 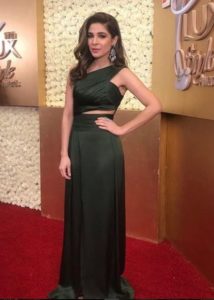 Ayesha appearing on a Best Dressed List is a given and boy did she meet our expectations, which by the way were pretty high after that New York trip. Just like Sadaf Kanwal, Ayesha Omar bowled us over with a satin silk green dress she chose for her second look. Stylist Rao Ali Khan and makeup artist Omayr Waqar gave her this simple yet elegant look in just under five minutes! This definitely is one impeccable look which was created under a record time. 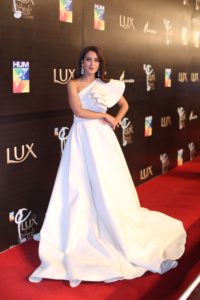 Although Iqra Aziz likes to play it safe, just like she did last year at the Hum Style Awards with that black outfit, she sure manages to bring an extra oomph factor to the red carpet. The statement earrings paired with an all pure white ensemble made for a sure shot hit and that is that is exactly what we expected given style guru Ehtesham Ansari was creating the look. We only wish the dress was a tad bit shorter in length for the petite Iqra seemed a bit lost in it. A yay nonetheless. Va va voom! Veteran beauty Aamina Sheikh surely gave the newbies a tough competition by donning this custom made outfit by Sana Safinaz. The short, edgy hairdo and shimmery eyes added extra pizzazz to Aminas glitzy outlook and quite honestly this was the only red carpet look which literally made people turn heads. You go girl! Okay, we are not really sure what we feel about the colorful floral embroidery, although a slightly altered version of the same ensemble looked rather hot on Jahnvi Kapoor. Somehow it didn’t quite work wonders on our Lux girl, Mawra Hocane. We wish she would have done away with that drape around the shoulders which looks like torn, shredded cloth. You win some, you lose some Rao. 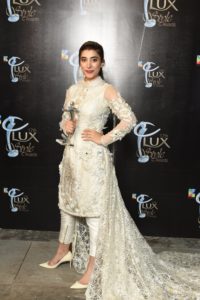 First could someone tell us what in God’s name is that dress. Is that supposed to be a gown with a trail?  A kameez? Like what is it? Definitely a classic case of fusion gone wrong, very wrong! Thus just like the younger sibling, the elder Hocane failed to impress. Add to that her laid-back hair and minimal makeup which did not blend well with her whole styling. Wearing red on a red carpet was a ballsy move on Mathira’s part but unfortunately, the look ended up being a major nay.The ensemble could have worked, actually, it would have looked hot, had the designer gotten rid of the furry shoulders and all that frill which made the gown look absolutely tacky. We wished she had kept her makeup minimal, for it seemed like there was too much of red going on. Hadiqa Kiani’s kurta pant-type of an outfit was way too casual and bland for the LSAs. On top of it all, it seemed like Hadiqa was in a rush and couldn’t get it ironed. Maybe if her stylist had added a pop of color somewhere, it would have worked for her. 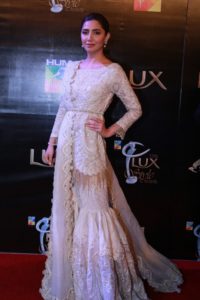 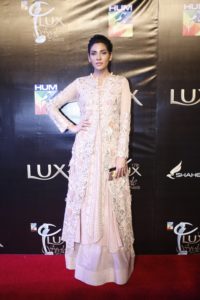 Unless they had a wedding to go to after the event, these three beauties created looks that weren’t red carpet appropriate at all which is why share a spot on our list. As beautiful as your black lace dress maybe, you’d get a major boo if you showed up in that on a mehndi. Similarly, these three wore ensembles which worked on their own but given it was the LSA red carpet, a major no!