Horrible Bosses is one of those modern-day audience favorites in which an outrageous and dark premise works because of an ensemble cast that knows exactly how to handle the zany and somewhat quirky writing for maximum comedic value.

This hilarious noir-drama plays on the fantasy of many – I mean, who hasn’t imagined about how the world could be a better place if their boss didn’t exist? Well, this is exactly what our bumbling heroes Nick Hendricks (Jason Bateman), Kurt Buckman (Jason Sudeikis) and Dale Arbus (Charlie Day) set out to do – with some unintended results.

Their bosses, Dave Harken (Kevin Spacey), Bobby Pellit (Colin Farrell) and Julia Harris (Jennifer Aniston) respectively, are seriously psycho though…not only with the things that they do but also with what they think about doing in the workplace!

We feel a Pakistani remake is something that will work really well with the current crop of talented stars, and are quite sure it would end up being a box office smash. Here is who we would like to see in the film… Ahad would be perfect as the frustrated executive at a financial firm who is always overlooked for that coveted promotion. The Ehd-e-Wafa star previously exhibited a lighter side in the television serial Yakeen Ka Safar and this role would offer him the perfect opportunity to unleash his dark — and slapstick — side!

Jason Sudeikis plays a somewhat straight-laced character in the Hollywood original, and Mikaal would be his perfect replacement in the Pakistani remake. The Sherdil star would do well playing the accountant who has to deal with the antics of a new, drug-addicted boss, not to mention going along with the hare-brained plan his friends concoct. 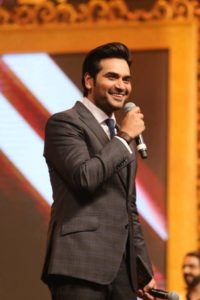 As the drug-addicted son of a former factory head, Collin Farrell’s performance ranks amongst some of his most strikingly memorable ones. With the flair with which Humayun Saeed has been able to essay a whole diverse range of roles, ranging from a Punjabi loverboy to a scheming villain — we are sure he would have absolutely no problem nailing Farrell’s character. His on-screen interaction with Mikaal would be worth watching as he tortures his on-screen underling!

In the original film, Charlie Day nailed his portrayal of a dental assistant who is sexually harassed by his boss. We reckon Ali Rehman Khan would perfectly capture the haplessness so hilariously conveyed by Charlie Day – not to mention his sequences with his female boss (Ushna Shah) would surely bring the house down!

We believe Adnan Siddiqui would be perfect as the psychopathic master manipulator who keeps appropriating all the promotions for himself. After exploring the dark side with Shahwar in Meray Paas Tum Ho, the talented actor would get to experiment with dark comedy and we are quite certain he would pass with flying colors!

Jennifer Aniston played a sexually aggressive dentist in the Hollywood original, and we are dead on sure that Ushna Shah would be her perfect replacement. The uber-talented Ushna has explored a whole wide range of characters on television and in film, and this performance would be her big-ticket to silver-screen stardom. I mean, who would not want to see Ali Rehman Khan hilariously squirming while Ushna makes her moves?

‘I Am Unable To Let Go Of Kashf’ – Hira Mani

Then And Now: Debut Projects That Launched These Leading Heroes