Last week team Galaxy Lollywood paid a visit to Universal Cinemas Lahore, which happens to be the largest multiplex in Pakistan with a whopping nine screens! Furthermore, the cinema also has the largest screen in Pakistan (which trumps the IMAX screen) and it has two of them! We went there to check out how the cinema actually is and here’s our experience.

We made our way to the cinemas which are located in Emporium Mall Lahore. Entered the beautifully designed lobby which was definitely one of the best ones we’ve seen in a long time. Loved the edgy futuristic blue theme.

Given that the cinema had 9 screens this meant quite a few movie options, so we decided to split up. Two of us went to the Ultra Screen ( the biggest screen) and geared up to see ‘Mummy’ while the third member went to see ‘Raabta’ in the relatively smaller screen.

We got seated in the Ultra Screen and oh boy, the screen was definitely big! The seats were super comfy recliners with ample leg space and the perfect viewing angles. Before the film began, trailer of Pakistani film ‘Yalghaar’ played and I couldn’t help but go gaga over how visually stunning the film looked on this screen. I had seen the film a few days back at its premiere in Islamabad on a rather tiny screen and seeing the film on the Ultra Screen felt like I was seeing .a completely different film. I couldn’t help but wonder how amazing the experience would have been had I seen the film here.

Some more trailers and then the demo video for Dolby Atmos played which reassured that we were going to get the best movie experience courtesy the Atmos 3D Sound.

The film was playing and we were definitely immersed into the film courtesy the picture quality and sound. The film ‘Mummy’ seemed twice as much fun courtesy the super huge screen and sound.

After our film ended we thought we would explore the cinema a bit and Mr. Wahid Imran, Assistant Operations Manager, showed us around. We visited the Gold Cinemas which has 2 screens with recliner sofas and a cozy homely environment for people who don’t like the cinema rush. These screens also had their private entrance, lobby and a cafe. Given the smaller screen size, this was not what a hardcore cinema lover would appreciate but for people wanting privacy and comfort, this is your go to screen.

We took a few photos here and there and left the cinema promising ourselves that this where we would be seeing all movies now!

Here are some details about the cinema which you might find useful. 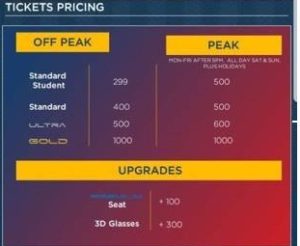