14th August is a special day for Pakistanis all around the world. On this day we not only celebrate the spirit of our independence but also strengthen our resolve to achieve excellence as a nation. Pakistani cinema has considerably upped its ante in the past decade and a half. Despite its limited resources it has expanded its niche exponentially giving its fans ample reasons to celebrate. It has continually created content that serves to raise our national spirits when it comes to national causes.

This Independence Day, Galaxy Lollywood presents the names of fourteen films that are the perfect way to rejuvenate our national enthusiasm and serve to fuel up our patriotism.

The British-Pakistani biopic made on the life of Muhammad Ali Jinnah was originally released in 1998 and to date, it remains the most critically acclaimed patriotic film to come out of Pakistan. The film was re-released in 2015 in a high definition format. Directed by Jamil Dehlavi, Jinnah boasts of an ensemble cast with names such as James Fox, Maria Aitken, Richard Lintern, Shireen Shah, Indira Varma, Shakeel, Vaneza Ahmad, and Shashi Kapoor who also narrates the film. The film is a treat to watch for its captivating screenplay, dialogues, and accurate portrayal of the independence era. Waar is one of Pakistani cinema’s most iconic and biggest blockbusters that put everyone in awe of its technical prowess at its time of release. Directed by Bilal Lashari and starring Shaan, Shamoon Abbasi,  Ayesha Khan, Hamza Ali Abbasi, and Meesha Shafi in pivotal roles, the film is centered on a retired army officer who is forced to come back to fight against terrorism in Pakistan, and the past that haunts him. The film received widespread acclaim for its screenplay that stylized the depiction of events surrounding Pakistan’s efforts to conduct a war on terror on state-sponsored terror groups, which resulted in warfare among tribal units in North-West Pakistan. Khuda Kay Liye is an iconic film for being the most audacious films of Pakistani cinema history as well the first film which kicked start its revival. The film created an uproar at the box-office upon its release. It also drew criticism from conservative sections of society as it challenged their hard-line stances with much effectiveness and nuance thus strririg a debate against extremism across the country. Featuring names like Fawad Khan, Shaan, and Imaan Ali the film still holds relevance as a must-watch Pakistani movie. Recently having its world TV premiere, the film is a 2018 romantic action saga directed by Haseeb Hassan. Featuring an ensemble cast of Hamza Ali Abbasi, Ahad Raza Mir, Hania Amir, Kubra Khan, Marina Khan, Shamoon Abbasi, Shaz Khan, Shafaat Ali to name a few. The film is a tribute to the jawans of Pakistan Air Force who protect the country from the skies. Sherdil is another film that is set against the backdrop of PAF. The film is a well-shot airforce action drama that resonated with the audience when it was released at a time when Pakistan Airforce had shot down two Indian jets in a historic dogfight and captured its pilot. Written and produced by Nomaan Khan, directed by Azfar Jafri and starring Mikaal Zulfiqar, Hassan Niazi, Armeena Rana Khan, and Sabeeka Imam in the lead roles, the film is a family entertainer that also serves its purpose of being a patriotic film. Operation O21 is the first-of-its-kind Pakistani spy action thriller film directed by Jami and Summer Nicks. Starring Ayub Khoso as an Afghan spy, who wants to save his country from corporate warfare and has to collaborate with Shaan Shahid, his Pakistani counterpart where they struggle to save the two countries from the looming war by Western forces. The film explores Pak-Afghan’s brotherhood and themes of patriotism with subtlety and nuance. 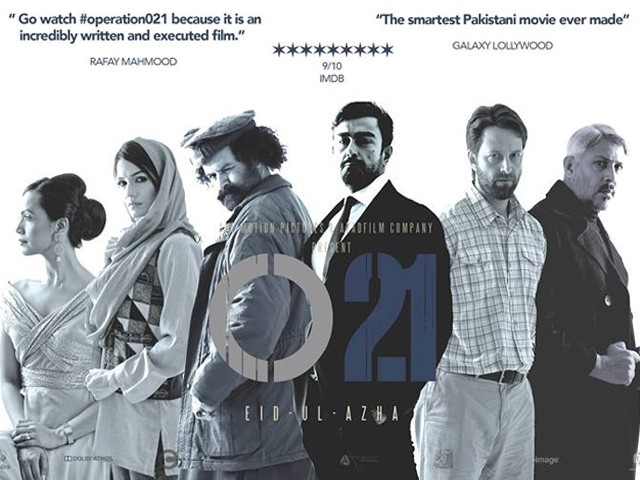 Chambaili is a 2013 political thriller film directed by Ismail Jilani. Starring Salmaan Peerzada, Khalid Ahmed, Mohammed Ehteshamuddin, Maira Khan, Shafqat Cheema, and Shahzad Nawaz, Chambeli explores the theme of political corruption in the country. The film had encouraged patriotism and nationalism when general elections were just around the corner. It was praised for its contribution to democracy credited with persuading non-voters and youth to vote in the 2013 General Elections. Political parties in the country had played songs from its soundtrack during campaigns and its music increased social and political activism. Moammar Rana’s comeback project to the newage cinema, Azaadi is an action thriller based against the background of Kashmir issue. Written, directed, and co-produced by Imran Malik, the film was released in 2018. Apart from Moammar Rana, the film stars Sonya Hussain and Nadeem Baig in the leading roles. The film’s action sequences are reminiscent of the classic Lollywood action sequences. Azaadi is a film filled with patriotic fervor. Maalik is a 2016 political thriller directed by Ashir Azeem(PTV’s Dhuwan fame). The film revolves around a retired SSG officer and his anti-corruption crusade against the corrupts in power. It also depicts Afghan war and Talibanization amongst other issues faced by the country. The film was banned by the Sindh government for its negative portrayal of politicians in Sindh however later a court order re-released the film in cinemas. This one of its kind Pakistani sports biopic made on a shoestring budget is not only a case study for filmmakers to make good films on a budget, but it is also a heartwrenching account of the struggle of a sportsman amidst the corruption that is ingrained within the country. Written and directed by Adnan Sarwar, Shah is based on the life of Hussain Shah who won a bronze medal in the 1988 Seoul Olympics and remains one of Pakistan’s most iconic Boxers. Starring Humayun Saeed, Ainy Jafri, Noman Habib, and Mahnoor Baloch and directed by Syed Ali Raza Usama, the film is based on the theme of cricket. Set against the backdrop of rural Sialkot, the film explores the world of cricket in Pakistan, the underlying corruption, and the struggles of a common man against it as all he tries to use his passion for cricket to bring honor to the nation. Peppered with beautiful music, the film is a sports drama that depicts Pakistani culture in a hilarious, relatable, and emotional way. Lollywood era’s director Shehzad Rafique made Salute in 2016 which is a biographical film based on the life of martyr Aitzaz Hasan Bangash, a schoolboy from Hangu who confronted a suicide bomber, preventing his attempt to bomb his school, thus saving around 2000 lives. The film stars Ali Mohtesham, Ajab Gul, and Saima Noor in leading roles. Tere Pyar Mein is amongst the last successful films coming for Lollywood Era. Produced by Evernew Studios, the film was released in 2000. This is a crossborder love story that eventually depicts Kashmir’s freedom struggle was the launchpad for Zara Sheikh’s career in Lollywood. This film was hugely successful upon its release and had its ‘diamond jubilee’ (one year running) to packed cinema houses. Bedari holds an interesting and unique spot amongst the list for being associated with unique controversies. Released in 1956 the film though was initially well-received yet it ensued widespread protests for allegedly being a copy of a Bollywood film that led to it’s banning. However, the film retains its status because of its widely popular music that is still relevant. ‘Aao Bachho Sair Karain’, ‘Chalo Chalen Maan Sanon Ke Gaon Mein’, and ‘Aey Quaid-e-Azam, Tera Ehsan Hai Ehsan‘ are patriotic songs that are remembered to this day.

Then And Now: Debut Projects That Launched These Leading Ladies